Women and the Holy Spirit

Recently I (Adria) had the opportunity to attend a regional women's retreat through World Impact at our organization's camp in Florence, Kansas.  I, two other staff ladies and one of their infants, and one of my neighbors crammed all of our stuff  into a minivan and headed out there on Friday.  It's about a seven hour drive, which allows plenty of time to get to know one another.  The lady from the neighborhood is a Mom of four, and grandmother of nine.  She cares for several of her grandkids, and has a house full of little ones at all times.  It was such a blessing to get to know her more and for her to have some much needed rest.  She loves the Lord and is looking for more ways to deepen her relationship with Him.

When we arrived, we realized that a good portion of the attendees from Dallas and Wichita (the other two city ministries in our regions) were Hispanic, and some did not even speak English!  The demographics of those cities are so different from our own; North St. Louis is 98% African American.  The retreat was set up to accommodate the Spanish speaking ladies, with interpretation and even by singing worship songs in Spanish.

Yes, I took High school (and a little college) Spanish, and I lived in Houston and Camarillo...both areas where there are a lot of Spanish speakers...but I'm ashamed to say that almost none of it stuck.  Much of our World Impact staff from Wichita and Dallas can speak Spanish, but the rest of us were at a loss to communicate.  It was uncomfortable to try to sing songs in a language I couldn't understand, and the sessions were hard to focus in when every sentence had to be translated.

However, I was so encouraged by the way the Holy Spirit worked and brought unity among us.  Jesus doesn't ask us to change our culture to worship Him.  But, He does ask us to be ONE in Him.  That means we have to do the hard work to bridge the cultural and social barriers that divide us.  It was humbling to sit through the Spanish sections and be completely clueless.  I had to check my impatience several times, realizing the Spanish speaking ladies were having patience for me, during the English speaking sections.

It wasn't the easiest way to conduct a conference, but it certainly proved to be a powerful expression of the unity we have in Christ and how the Holy Spirit overcomes all barriers! By the end of the weekend everyone agreed that the Holy Spirit had been at work. One of the older Spanish speaking ladies came and gave us all hugs as we left Sunday morning. I couldn't say anything of consequence to her, but in her hug there was an understanding that we are all on the same journey with Christ. I didn't have to understand her words to understand that she was my sister in faith.  All in all it was an encouraging time, and to steal the words of my neighbor and friend, we'd been refreshed and "ready to come home and kick butt!" 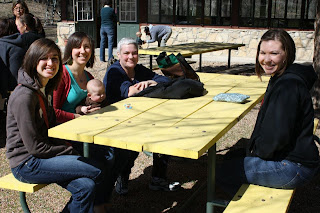 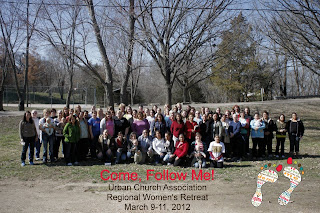