The days when I feel victorious as a follower of Jesus, a missionary, a wife, and a mom are so few in number. The days when I feel overwhelmed, exhausted, inadequate, and like I'm just barely making it through are too many to count. There are days where pridefully I think, wow, I'm totally rocking this working and homeschooling and parenting thing, and then there are most days--heeeeeeelllllppp!!!

Parenting and homeschooling have been particularly hard of late. We've traveled a lot and our Nut is getting old enough to really deal with some older kid attitudes and feelings. Wild Thing is the most exploring and obstinate child I know, which makes for lots of redirection and discipline all while trying to work and teach. School has been a grind this year. While chasing Wild Thing around the house, I've been doing my very best not to scream and run away crying (even while I explain to Nut that this is not an appropriate life response to school lessons) while we together try to navigate some of his particular challenges.

Today has been so hard and it is only a little over half way over. It hasn't felt like a victory at all. Every spelling word and math problem felt like a battle that was technically a win, but experientially damaging. Every attitude of resistance and defiance draining sanity and feelings of competency and patience. I'm really tempted to write today (heck, this week) off as a loss, a monument of inadequacy, but I'm not going to.

After lunch today Wild Thing was napping and Nut was in the backyard serving a debt of disrespect and I sat inside finding shelter in the silence. I felt so tired. I declared how hard today has been and acknowledged how many times I wanted to throw in the towel. My thoughts edged toward feelings of defeat but...

I didn't throw in the towel. Victory. I only yelled a little bit. Victory. I often chose calm and teaching words. Victory. I did my best to practice life and parenting choices that we are being coached in. Victory. I chose (mostly) not to mentally be somewhere else and be present in the thick of it. Victory. I acknowledged that I wasn't going to get the things done today that I had hoped and experienced the frustration but (mostly) didn't let it overpower my approach to parenting and teaching. Victory. I fought for a heart of peace today. Victory.

When I went outside to release him from his duties, Nut Nut handed me a fistful of love in the language of little boys, an assortment of tiny, pretty things picked carefully from among the weeds. I filled my little vase, given from another boy-mom for just these occasions, took a moment to take it in, and then we sat back down at the table to finish school. 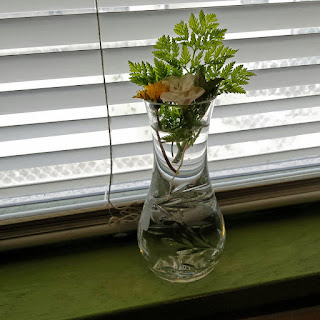 I am thankful for the days when the Lord lets me see victory more like a bouquet of pretty weeds and an unspoken commitment from the ones you love to imperfectly keep doing hard things together and less like an epic, conquering thrill. It makes more of life feel possible and Christ's grace on my everyday life so much sweeter.
Written by Adria at 3:12 PM No comments: