Days in the summer blur outside of their designated space; I have trouble remembering what day it is and which week we're marking off the calendar of programs. Summers are always intense and this one has not disappointed!

Two Thursdays ago we got a life-altering call, that turned the intense level up a notch! We were chosen as a pre-adoptive home for the cutest 2 1/2-year-old boy you've ever seen (OK, I may already be a little partial). Joy. Terror. Excitement. Anticipation. Overwhelmedness (Is that a word? Maybe not but you know the feeling). These are the feelings that have ensued since that call.

We met Little Man (that's what I'll call him since we cannot share photos or personal details about him on the internet until the adoption is finalized) a week and a half ago...really, only a week and a half? It seems longer in the blur of summer. We have already had a blast building a relationship with him and cannot wait to have him move in sometime in the next few weeks!

Just like everything else about our adoption journey it continues to be a test of our trust in the Lord and a testimony of His faithfulness. Through a series of events that can only be described as providential we found ourselves on the receiving end of an excited acceptance call from our licensing worker and Little Man's foster parents. Yet, there is still a journey ahead. This case is a legal risk placement, meaning there are many variables ahead and a daunting wait until adoption finalization can happen. This is not uncommon, particularly with younger children in the foster care system, but it is a test in trusting the Lord as we step out in faith and welcome this little guy into our lives.

God has continued to speak words to me about trusting in Him, even though everything in my controlling heart wants to rebel and subsequently freak out! One night while laying in bed worrying about the process I felt relief from Proverbs 3:5 "Trust in the Lord with all your heart and lean not on your own understanding. In all your ways acknowledge Him and He will make our paths straight." The road looks long and winding right now and so much of this process makes me feel inadequate, but all I'm responsible for is clinging to God for dear life and trusting that whether or not this goes as we would hope that He will see us through any challenges ahead! But, we are praying for a smooth process and remaining hopeful!

I wish we could share his picture with you because he has, as Andrew says, a "Million Dollar Smile" and I already miss his sweet face when we do not have him with us. So many thoughts are spinning in my head right now, so that is all for now! Thank you for your continued prayers and support. We have felt so loved by everyone's excitement for us!

One of the guys from our basketball program has a shirt that says "I'm a Hot Mess"...Andrew told me I needed that shirt yesterday.

Does anyone else feel like the carefree days of summer are just a distant memory that may or may not have been real?  I feel like summer used to feel like one endless day of fun.  Even in college I had a few years when I was not in summer school and work was light and I took many trips to the beach...the good ol' days.  Now summer just feels like one endless....

Summer is not a vacation in grown-up land.  In fact, it has become the most stressful and hectic part of the year for me.  Because there is so much ministry that happens in the summer it has become a season I anticipate with both excitement and dread.

In case the disturbingly early and frequent heat advisories hadn't clued you in yet: it's summer and I'm already a hot mess.

Aside from the fact that while your body is sweating your brain is 10x more likely to go crazy on people (totally my personal opinion but I'm sure there must be scientific evidence), I have about three people's full-time jobs to take care of and for someone who needs focus to do things well...I feel like I'm losing my mind most days.  Add a healthy dose of emotional stress while we continue on our adoption journey and you've got a recipe for "Homicidal Adria"--and that is not someone any of us want to meet.

It's hard, but it's not impossible.  Or, at least the Bible tells me so.  And that is what I need to cling to.  There is peace despite the circumstances.  "Be still and know that I am God." Psalm 46:10.  I need more of that in my life.  Some of the things that keep me going:
﻿ 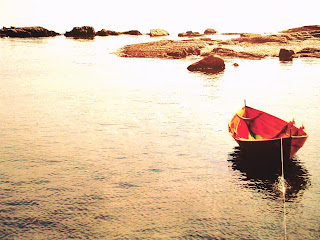 This photo is so peaceful to me. The color isn't great because it's a photo of a photo that Kelly gave me from his collection. We secretly named it "Hope for an INTJ." I love it and stand in the hall and stare at it on particularly rough days :).
﻿﻿ 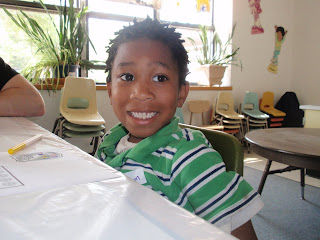 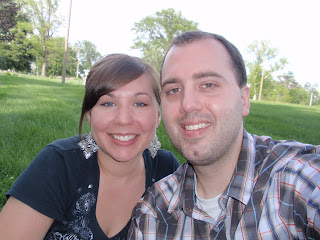 ﻿﻿﻿﻿I don't always like to admit it, but he keeps me calm and forces me to see the positive even if under duress.
﻿
﻿ 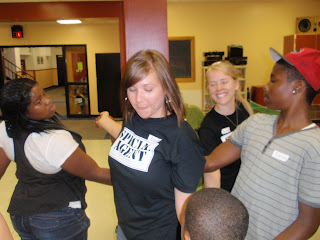 ﻿OK, doing the "Human Knot" with a bunch of 12-15 year olds in a room with no AC is not the most calming activity, but I do love these kids.
Written by Adria at 6:39 PM 2 comments:

Earlier this week Andrew and I went out to dinner with our friends and neighbors from across the street.  We decided to go to a restaurant we had all been talking about where they serve more food on one plate than should be legal.

We got to the restaurant, sat down and started studying which glutinous sin we wanted to commit.  As we talked over the merits of fried chicken vs. porkchops a man came up behind our booth and interrupted our conversation.  He was one of the cleaning staff.

He leaned in and said, "What you guys are doing here is so great.  You don't see that very often around here.  It's really wonderful."  He said this as he gestured to our neighbors and then to us.

We didn't quite know how to respond.  After he left we looked at each other a little perplexed.  Our neighbors are African American.  We, obviously, are not.  It hadn't crossed our mind that someone would see us sharing a meal together and find that different, even inspiring.

The man commenting on our friendship was also African American.  There was something a little off about him but he was very sincere.  As we were finishing up dinner, he came back by our table to talk some more.  The theme of his comments continued to touch on how much he thought our interracial friendship was a great example of something people don't usually engage in.

At one point in the conversation our neighbor got distracted when a photo of the restaurant's Fried Banana Pudding dessert flashed up on the tv screen.  He asked our interested guest if it was any good.  "It's great," the man said.  "In fact I'll buy it for you, if you want it.  I think you guys are doing such a great thing, I'll order one for you."

And, since men don't turn down free food even if they just ate enough food for a small village, the husbands at the table said, "OK."

When we left the restaurant we laughed about the experience.  But even though we didn't think there was anything unusual about our time together, I felt a deep sadness for the employee.  He was so sincere about the issue that he must have experienced some significant hurt throughout the years.  He obviously felt deeply the racial bigotry and tension that still often lays under the surface in our politically correct culture.  It hurt me to think about that.  I don't like to think that race still means so much in our world, but it does.

We did take home some delicious friend banana pudding from the restaurant, but I also took away a heavy heart.  I pray that the man carried home with him a lighter heart.  Even if he didn't know Christ, I hope he might have felt some of Jesus' reconciling power just by seeing a very simple and uninspiring act of friends from different racial and cultural backgrounds sharing a meal together.

I am so thankful that we serve a God who sees us all as His beautiful children and that I have the privilege to look into the face of someone much different than me and see Him.
Written by Adria at 10:05 PM 2 comments: