So, if you haven't already heard, World Impact has been hit three, yes three, times by copper thieves!  This week ahs been quite a week.  Tuesday we discovered that someone had stripped copper out of the air conditioning units and other wiring on our roof.  Wednesday, when showing our contruction committee the damage we discovered that we had been hit again overnight!  We also discovered that along with completely demolished air conditioning units they had cut the major power line to our large multi-purpose room and kitchen.  We are trying to get this fixed ASAP because we are supposed to have a Fall Festival here on Sunday night for an estimated 200-250 people. 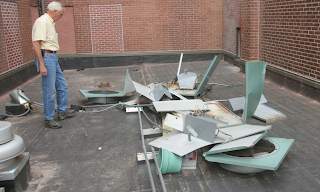 Estimates for the damage are approaching $200,000.   With most of the units destroyed and more damage being done we decided that we had to take action.  The guys on staff decided that they needed to stake out overnight to try and catch the guys in action.  Despite some ideas that involved paintballs, shotguns, ninjas, smoke bombs, among other things, they decided on installing several drivway sensors that sounded a remote alarm and Andrew took the first night's watch (on his birthday eve--Happy Birthday!).  With one of the sensors facing the alley he was up every hour as alley cats and random passersby, but at 5:20am the alarm sounded and this time 3 guys were here to do more damage.  Andrew called the police and called another staff member to come up.  The police arrived within a few minutes but the thieves had already gotten on the roof and started in on another unit.  When the cops arrived they were tipped off and ran off down the alley uncaught.
We were dissappointed but, at least they know that we are aware and that we have security...even if it is a staff member sleeping on a mat in the gym with a motion detecor :).  Randy's sleeping here tonight and Andrew the next night until we are sure they're not coming back or are caught.  Now comes the real work.  It has been a devastating financial blow for our ministry.  Sometimes it's hard not to feel like nothing goes our way!  It's hard to work and strive and watch things fall apart.

However, we are convinced that God is in complete control and He WILL provide all our needs.  We don't yet know how but He will make a way for us to raise the money.  We read a passage in church today about Paul that encouraged me.


2 Timothy 4:6-8, 16-18 For I am already being poured out like a drink offering, and the time has come for my departure. I have fought the good fight, I have finished the race, I have kept the faith. Now there is in store for me the crown of righteousness, which the Lord, the righteous Judge, will award to me on that day—and not only to me, but also to all who have longed for his appearing. At my first defense, no one came to my support, but everyone deserted me. May it not be held against them. But the Lord stood at my side and gave me strength, so that through me the message might be fully proclaimed and all the Gentiles might hear it. And I was delivered from the lion's mouth. The Lord will rescue me from every evil attack and will bring me safely to his heavenly kingdom. To him be glory for ever and ever. Amen.
We are praying for those men that they will encounter God's saving grace.  We are praying in confidence that God will provide for our needs for He stands by our sides and give us strength.
If you want to help by supporting financially you can donate here.
Written by Adria at 9:46 PM