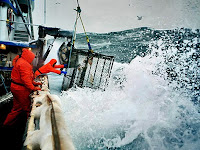 It’s a funny show to get hooked on, but Andrew and I can’t get enough of the “Deadliest Catch.” Usually aired on the Discovery Channel (we don’t have cable) we get to watch old seasons through our Netflix subscription (thanks Mom and Dad), which, I must admit, occasionally results in several-hour marathons watching sailors with colorful personalities haul crab out of the ocean. It seems like an odd obsession for two inner-city missionaries, but recently while watching one of our King Crab Marathons I felt a strange kinship to their experiences.

Every episode I watch I think, you could not pay me enough to work on a boat in the middle of the Bering Sea hauling hundreds of thousands of pounds of crab out of the water 30 hours at a time. No way. But the guys doing it love it. I heard one captain refer to their work as a calling. Many come seeking the good money (an average season of a several weeks makes the crew about $30,000 each) but few make it a living. The physical and mental demands of long hours and hard labor drive many off the waters. It’s not uncommon to watch a “Greenhorn” (as the newbies on the boat are called) crack 20 hours into their first “grind,” leave the boat when back in harbor, and never be seen on the crab boats again.

For those of you who are not avid watchers of “Deadliest Catch” and are not yourselves Crab Fishermen, let me set the stage for you a bit. The Alaskan Crab Fishing Season runs from about October to January, but it is broken up into different species of crab seasons that are usually a couple months long a piece. Some crab fishermen only fish certain seasons, but many of the seasoned crew and boat owners also fish other things and are then gone from their families (who often live in other U.S. states than Alaska) most of 6-8 months at a time. Most crab fishing boats (at least the ones on the show—because that’s the extent of my knowledge of this field :) have about 5-7 crew members. They chart a course in the Bering Sea and drop big crab-catching cages called “pots” into the ocean through the use of hydraulic cranes and brute strength. The entire season includes them setting and hauling these pots until they catch their quota of crab poundage—which sounds WAY easier than the work really is.

At this point you’re probably saying, OK, Adria, but this still has nothing to do with Inner-City Missions—I’m getting to that part. As I sat and watched these men do what they love to do I could not help but identify with what that one captain referred to as their life calling. Andrew and I have seen many inner-city workers come and go and every single one that makes it in the city says it is their calling that tethers them to this place. There are breaking days where even the seasoned deckhands on these crab boats reach the end of themselves and feel almost too tired to go on, but in the end they are fixed to the ship by their love for their work and the surety that they are doing exactly what they are suited for. Most experienced inner-city missionaries I know say they must write down the calling God has laid on them as a place to revisit on those breaking days and it is that calling that fixes them to the city.

You might think that with all this talk of calling and of being part of an elite team of naturally suited guys, that there would be an air of superiority about them. They make a lot of money for doing manual labor, they sacrifice a lot to make that money, and there are hundreds of guys who don’t make it out there. Yet, most often you hear them say that they are so lucky and grateful to be doing what they do. They don’t despise those guys who don’t make it on the Bering Sea, unless they don’t make it because they’re not willing to work hard. The captains and crew share that they couldn’t imagine doing anything else, even if they know it’s kind of a crazy profession. Occasionally when we as inner-city missionaries go to missions fairs and visit churches to do support raising, people comment on the nature of our work. They kindly hold our hands and self-deprecatingly esteem our calling over theirs. Although they mean nothing but encouragement it often makes me uncomfortable. Knowing myself like I do, I’m certainly not the saint imagined by this well-meaning church member. All I know is that if you feel that by working in the city you’re doing what you feel suited to do then, like the crab fishermen, you’re just doing your job and grateful to do it.

The show quickly draws you into the stories of these men and their mission on the sea. Sometimes while watching the show I catch myself almost holding my breath, tense with the anticipation of each boat’s imminent success or failure. As they haul each pot out of the ocean it feels like I’m leaning forward with the crew as they wait for the top of the pot to appear over the rail, hoping to see it full of crab. When the boats set their strings of pots, often they have to blindly lay sets to locate good fishing waters. It can be disheartening for the crew when they spend several days setting and hauling pots only to have a handful of crabs to show for their hours of labor. Then other times, as the pot clears the side rail, cheers of victory erupt from the crew at the sight of a pot full of thousands of dollars worth of crab. I find myself empathizing with this process, identifying it with the process of working with people when the investment is so high but the results just seem so meager. But then there are those times that you labor and cry and come so close to giving up and then God does an amazing work in someone’s life and the joy buoys your spirits with hope and gladness.

Inner-city work is much like crab fishing; it’s a high stakes, high rewards lifestyle. For us there isn’t a $30,000-$50,000 paycheck awaiting us every few months, but there is the knowledge that God’s Kingdom is presently advancing in the lives of people in the city. That is true reward indeed, and in the end all the work and all the struggle is worth the joy of watching God’s plan for the city unfold. But it’s not for the timid, for the faint-of-heart, or for those who aren’t ready to commit all their loyalty and all their strength to sail midst the storm and put faith in The Captain to navigate the waters.
Written by Adria at 3:51 PM