Friday night we had a Middle School Movie Night, and despite the fact that it was cold, dark, and rainy we had 7 kids show up. In our current youth group meetings we've been talking a lot about Jesus and our need for salvation, so we watched the movie Narnia with the intention of discussing its parallels to the Gospel message. 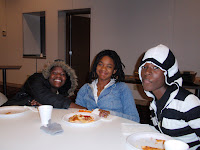 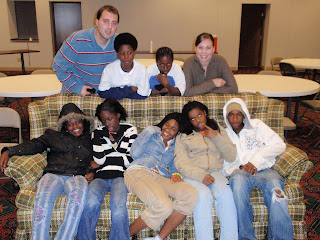 Every time I watch that movie through that lens I glean more from it. It is a powerful story (it doesn't hurt that I'm a huge C.S. Lewis fan) and one thing that really stood out to me watching it this time was the theme of "The Body." Peter, Susan, Edmond, and Lucy all want to belong to the epic battle between good and evil. They join a fight that is so much bigger than themselves. And then, throughout, there is a bond of loyalty that runs through those fighting for Aslan. I couldn't help but think about the battle that we as Christians are fighting, a battle that seems almost impossible at times. Often it takes a fellow believer taking a stand beside us and promising to fight with us until the end to bring courage to the fight. And then there are the gifts that Peter, Susan, and Lucy are given: Peter the sword and shield, Susan the bow and arrows and horn, and Lucy the dagger and healing potion. These gifts were used to advance the battle and to care for those they fought with. Likewise, the gifts God gives each of us are to be used in the great Kingdom battle and to care for our fellow believers, the Body of Christ. I don't know if Lewis wrote all of that into the story or not, but one thing I love about literature is that you can interpret different things from the different lenses you view it through...in that way a story never grows old because we are constantly growing and seeing life through different eyes.
It was fun to draw out some of the symbolism from the movie with the kids. They were a little slow catching on at first but then they started to see the parallel between Aslan and Jesus and Edmond and our sinful natures. One of our boys, who is smart and funny, but who rarely seems to be listening with his class-clown ways and disruptive behavior bowled us over with an insight. He said, someone who could represent Edmond is Paul. Andrew asked him how that was, and he answered that Paul used to be a really bad person who hated Christians until he got saved and started doing good. All three of us leaders looked at each other with acknowledgement of the hard battles we have fought with one another to lead these wonderfully, difficult children: he had been listening all summer long when we had talked about Paul several times! And even more, he remembered the story enough to accurately apply it to the interpretation of Narnia!
It was a good night.
Written by Adria at 11:37 AM