Sweet Victory for the City

One of the church planters stood at the front of the room rocking slightly back and forth as he remembered the road that brought him to a place of leadership. It was the closing service and testimony time for Evangel School and with an incredulous smile on his face he saw himself through the eyes of people who knew him before he followed Jesus and said, “Everyone would say, ‘Not him! Not him.’”

Then his smile grew grateful, “But God,” he declared. 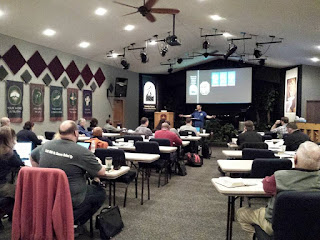 Wichita’s first Evangel School of Urban Church Planting was full of moments like this—acknowledgements of weakness and lack of worldly qualifications but of a big God, who, as another woman attending claimed, “can use us beyond what we think of ourselves.”

So much work and prayer went into the three days these church plant teams gathered and I think each of us, whether attendees or staff, came away with another glimpse of God’s grand, redeeming vision for our cities. It renewed in my own heart just how important something like Evangel is for urban church planters, who are short on resources and support and encouragement, and yet, they still put themselves on the front lines to win back the lost. What an honor it is to serve and encourage and challenge and learn from these men and women who lead, not because they feel qualified but because God called them. And, what a blessing it is to be able to arm them with resources and training that will help them fight the battle ahead.

God did unexpected things through our first Evangel School, yet even in the unexpected, the expected happened. The Spirit was present and leading and releasing individuals and teams from strongholds. Teams had the time to dream and clarify and recommit with and to one another. Our Evangel Coaches were able to speak life and encouragement and wisdom into leaders who so often give but rarely receive. Iron sharpened iron as the church planters shared their struggles and vision. Big dreams were spoken and courses of action were charted. 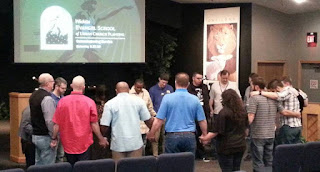 While each team left in a different stage of planning and execution, they all left with a taste of what another of the church planters described as “sweet victory”—the kind of sweetness that only comes with victory in Christ and makes you want to declare “Oh, taste and see that the LORD is good!” (Ps 34.8). And, really, in the center of all the best church plant strategies and philosophies and in the heart of every good church planter is the acceptance of Christ’s sweet victory and the burning passion to pass it on.
Written by Adria at 1:02 PM