Too Much Stuff to Go?

Recently, Andrew and I have been talking about how ready we are to answer God's call. We determined that we aren't as ready as we thought.

Our years as inner-city missionaries and the last year of transition have helped us look at things different, it's true, but we have so much more to learn. We never expected to leave St. Louis, but we have since realized that we weren't really thinking like missionaries. A missionary is on a mission, and any good mission has a beginning, middle, and, most importantly, an end. The last thing a good missionary should ever do is become entrenched. This is not to say that staying in one place for a long period of time is a bad thing, but it should be done because God directs it, not because it's hard to leave. Staying should be as active a decision as leaving and we must be ready to stay or to go at God's command. 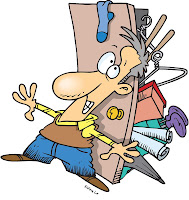 Along with a change in thinking we realized that we needed a lifestyle change. If we are to be ready to be on mission, we need to be able to travel light. WE. DO. NOT. TRAVEL. LIGHT. We have stuff upon stuff--too much stuff. It's happened gradually, mainly because we don't get rid of things. We both get sentimental and I'm cheap...if I paid for it once I don't want to have to buy it again someday. But, it's hard to move stuff and I cringe when I think about ever having to move again. If stuff becomes a hindrance to joyfully following my Savior then it's got to go! Plus, Andrew heard a news story about clutter where the "expert" reminded people that almost everything that clutters up our homes can be replaced for $20 in 20 min, which I have found to be fairly accurate as I mentally catalog our junk.

So, we have begun a purge project in our house. I'm sure what we feel is a huge cut may still seem small to others, but we have to start somewhere. What it really requires is a lifestyle change, which is a process, but we are committed to making a change!

The last thing we would ever want is for stuff to be the reason we can't follow (or don't want to follow) Jesus anywhere He may ask us to go.