Take me out to the ball game... 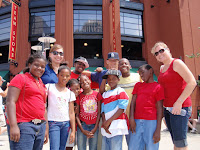 Yesterday eight kids decked out it red excitedly gathered at the World Impact on the verge of the much anticipated Christian Family Day fieldtrip. All summer these kids had been working towards earning this fieldtrip. Having limited tickets available, we made this fieldtrip attainable only by the "best of the best." This fieldtrip required the accumulation of the highest amount of points (points earned through attendance, memory verses, and bonus points). 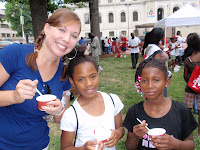 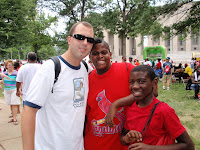 And so, at half past noon we set out in our big brown van for a day full of festivities. First we attended the pre-game carnival where we were given free Chick-fil-A and Coldstone Ice Cream and we played several of their carnival games. 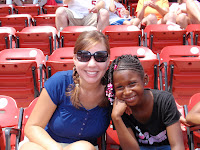 Then we were off to the game! The last few years we have gotten seats at the very top of the stadium, under the shade. So this year, to "sell" our nosebleed tickets to the kids, we pitched them as luxury seats under the shade and open to the cool breeze where you can see everything. So yesterday when we filed into our row, 10 rows down from the shade, still in the nosebleeds, there was a collective groan...."Andrew, you said we were gonna be in the shade"....You told us our seats were in the shade, Andrew." The kids were not happy. (We were not that happy either!) But we acted excited to be closer to the field and began our several hour sit in the roasting sun. It was HOT! But we made it through the game and got a free hot dog and drink with our ticket. Even though it was miserably hot, the kids loved being able to be at a game. 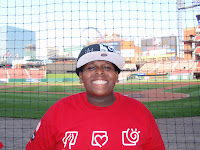 After the game came the concert, and a special part of the program for one of our boys, as he got to go down on the field and meet several of the players.
All in all it was a good day. We came home dead tired and drenched in our own sweat, but the kids had enjoyed the day that they had worked so hard to earn.
Written by Adria at 10:49 AM